ASK THE DOCTOR
As many of you know, at 12 weeks pregnant I underwent a conisation followed by a cerclage stitch to remove cancerous cells. I continued my pregnancy constantly worried if I had done harm to the baby, and if the baby would ever make it to full term.

Imagine…I ended up OVERDUE! I had my heart set on a vbac (vaginal birth after c-section). So much so, that at 41 weeks + 1 day I switched doctors and hospitals! From 39 weeks my doctor at City Hospital was basically bullying me for a c-section and that she would not allow me to reach 42 weeks. It upset me so much because she knew from early on what my dream was! Thankfully a friend told me to contact Dr. Mia Branch at American Hospital when I was 41 weeks and freaking out! I managed to get an appointment the following morning! I could not sleep that entire night… That day I had told my doctor at City that I was no longer her patient since she was unwilling to help me. The stress she caused me, giving me deadlines to have the baby pushed me over the edge! That Wednesday she said “this is my final extension for you”. I was 41 weeks. That is when I said good riddance! Then I had thoughts that maybe I was harming the baby and making the wrong choice…Couldn’t be! 40 weeks is an estimated delivery date, and very common for women to deliver at 42 weeks ( my mother in-law, and mom went to 43 weeks in the 80’s). Why couldn’t I at least be given the chance to try? I had the strongest urge to give my body the chance to do what it was designed to do! With my first pregnancy I cried so much because I had not educated myself enough. If I had known what I was doing back then, I likely would not have ended up in the situation I was in today! I wanted to push, to feel that rush of exhilaration and satisfaction. I went with my gut, even though some around me thought I was crazy and could do more harm (uterus ripping, damage to cervix from previous surgery). The thing was, I felt fine, and according to tests, the baby was fine! The hell with everyone else! I was listening to myself for once! 9am sharp I was waiting to meet Dr. Branch! I told her my story and asked if she was willing to support me in my vbac wish. She was on board! She told me stories of successful vbac’s she had helped deliver, and I told her “OK I’m in!”. She examined me, I was 2cm dilated, but the baby still had his head up high…She told me she would let me go until 42 weeks. “Wow!” I thought! My husband, the extreme worry wart wanted to know the risks. Of course being induced before 42 weeks had risks, and going over 42 weeks carried it’s own bag of risks…Her question to me was how far did I want to go? I was willing to go  full term but again, my husbands anxiety was slightly holding me back.  We contacted the professor who did my surgery at 12 weeks for his opinion. He said he would let me go ten days over before inducing. Why was my first doctor so against it? Grrrr…out of convenience? We decided to listen to his advice after debating for days and days what the right thing was to do! I actually went 11 days over (12 if you consider the day he was born on). Saturday April 15th, 2013 I  arrived at American Hospital all ready with my bags in tow to get the show on the road! Still I was thinking…do I give myself three more days to reach  42 weeks? Do I risk injury to myself/baby? Maybe there would be no risks! If only I had a crystal ball! We went ahead with a gentle induction… The process only started after 12pm that Saturday. The hospital was suddenly swamped with a ton of mom’s in labor! By 1:30pm my labor was in full swing! I wrote a birth plan and pulled it out of my bag for husband to give to my midwife!

As my birth plan stated, I wanted a natural, unmedicated birth as much as I could. Let’s just say…people down the hall could hear me screaming! My mom and husband were by my side the WHOLE day. We had the TV on, and watched over 6 episodes to that Married To Jonas show. Lord help us! My mom and husband were INCREDIBLE! They held my hand every contraction. I could cry right now just thinking of how dedicated they were in helping me achieve my dream. They encouraged me, rubbed my back, made cold compresses, got me ice, fed me water through a straw. They barely moved or ate for hours! The BEST doula’s I could have EVER asked for!
By 10:30pm I was at my peak! I honestly thought I was going to die (ask me about the pain today, and I can hardly remember it!). Being a previous c-section/my surgery I was not advised to get up and move around. I literally laid in one position that entire day! In the most agony I had EVER felt! If I tried to turn the baby’s heart rate dropped. I remained on my right side staring out the hospital window watching the TV in reflection the remainder of that day/night.
The midwife came to check me, I was 7cm dilated! Wow nearly there! Water still not broken though, and baby’s head still high…
She told me to continue three more hours and she would return to check on me then. THREE hours??? OMG! NO! I was freaking out at that stage and trying to press the nurse call button but my husband and mom kept saying “NO! You can do it”. All along I thought of amazing friends who labored drug free (Julianne you were one of them!). They gave me the mental ability to reach 7cm. But after that, I was done! Contractions were hitting me HARD! I started screaming “NURSE! Bring me the epidural!”. My husband got so upset and hurt that he nearly left! I was going berserk! I threatened to kick him and told him I was dying. I MAY have even cursed a LITTLE! He caved, but only on the condition that he could make a video of me telling him I would not use it against him/my mother in future. I did it, and then anxiously awaited my pain relief. The anesthesiologist came, had me sit up, marked my back, and bang needle was in! I felt human again. I DID feel bad that I was not strong enough to push through another three hours, but honestly, laying on my side unable to move was the worst thing imaginable!
By 2:00am I was 9cm dilated and barely felt a thing! At 2:10am my fantastic midwife Linda broke my water with a hook. The head quickly came down. They thought by 4am I would for sure be ready to push! EEEK! I was so excited! My husband and I smiled! We were delighted with the news!
4am, 5am, 6am, 7am rolled around. Still 9cm dilated. I was violently puking and feeling a lot of pain again. At this stage my baby’s head was stuck, causing swelling, and each contraction made his heart rate drop.
My doctor arrived at the hospital at 7am (on her motorcycle, yes she is bad ass like that!). She didn’t feel the baby was in great danger, but she said he could be soon if I didn’t dilate more. At 9am she came back to check me, and we were still in the same boat. I broke down in tears, so did my husband. Over 20 hours of active labor…We had the most special moment together which reminded me why I married him, and loved him. He told me he knew how much I wanted a vbac and kissed me, and told me what a great job I did trying. That made me cry even more.
Dr. Branch said I could continue a bit longer, but things were not hopeful at that stage. The right side of my cervix was all swollen. She wasn’t sure if baby was not coming out because of his position, my pelvis…but it was most likely not going to work in my favor. She congratulated me for all my efforts. And that is when my vbac dream crashed and burned…
I was whisked away to the theatre and prepped for my c-section. Thankfully my husband came with me, and again was there by my side every step of the way.
At 9:39am , with much tugging and pulling, the doctor removed our baby boy from my stomach! His head was bruised/bleeding as it was really stuck in my pelvis, poor little guy!
Baby Nate Jerrard weighed in at a healthy 3.41kgs, 50cm long, big feet and hands and extremely well cooked! He was all peely, and looked like he had stayed in a bath for WAY too long!
And there you have it…my not so successful vbac story with a happy ending (a healthy baby).
I am SO glad I went with Dr. Branch. I am happy she gave me the chance to try and believed in me. What a wonderful doctor she is! 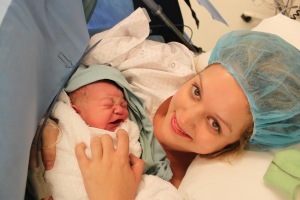 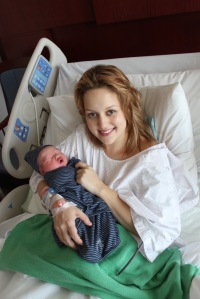 I would also like to thank Julianne, and Christy for their amazing support and knowledge in aiding me through my pregnancy and giving me strength.
P.S I know Dr. Branch genuinely cared to make my wish come true because she had a holiday booked the week I would be 42 weeks pregnant. But did not care one bit, and still gave me that option to go that far. Bless her!
﻿

Welcome to my oasis! Formely known as ‘Mommy in Dubai’! I am now 'Mommy in Vienna’. Why the change? Because I am now based out of the beautiful city of Vienna, Austria!

© Copyright Mommy in Vienna 2020. Powered by WordPress. Designed by BluChic