PRODUCT REVIEWS
*Please note that this is NOT a paid advertisement, simply honest feedback*
This review was really not a hard one for me to put together because EVERYTHING I have to say about {SnapSights} is AMAZING!
The best customer service I have EVER received in Dubai. Usually unheard of in this region, right? Common…how many times have you received bad customer service? For me, it’s usually on a daily basis. Safe to say, that this is NOT the case with {SnapSights}.
Now that I have cleared that out of the way you are probably wondering…what the heck is {SnapSights}? It is one of the most genius ideas I have ever heard of! I also find it extra cool, since I am a parent! Okay the deets now!!!
{SnapSights} is the only one of it’s kind in the entire world. It is a live child monitoring service ensuring parents a peace of mind that their child is safe even when they are not physically there. Which makes it the ideal tool for working parents, busy mothers or mothers who are anxious & scared of their child’s every move (insert me) being in harms way. This is especially reassuring after reading all of the daily newspaper columns of nanny’s abusing children while parents are away. The team that monitors your cameras is all-female. The company is fully certified by Dubai Police Department & Protective Systems. It is totally legit! How legit? Let me tell you my experience next!
I first received a call from Chris the technician. We confirmed my location and what time he would arrive at my house. The following morning at 9am on the dot, he was waiting at my front door. Clean, presentable and knowledgeable. I had no qualms letting him into my house. He surveyed my home and we discussed where the ideal place would be to install the monitoring cameras (which by the way are high definition IP cameras with motion sensors and pan-tilt-zoom functions). 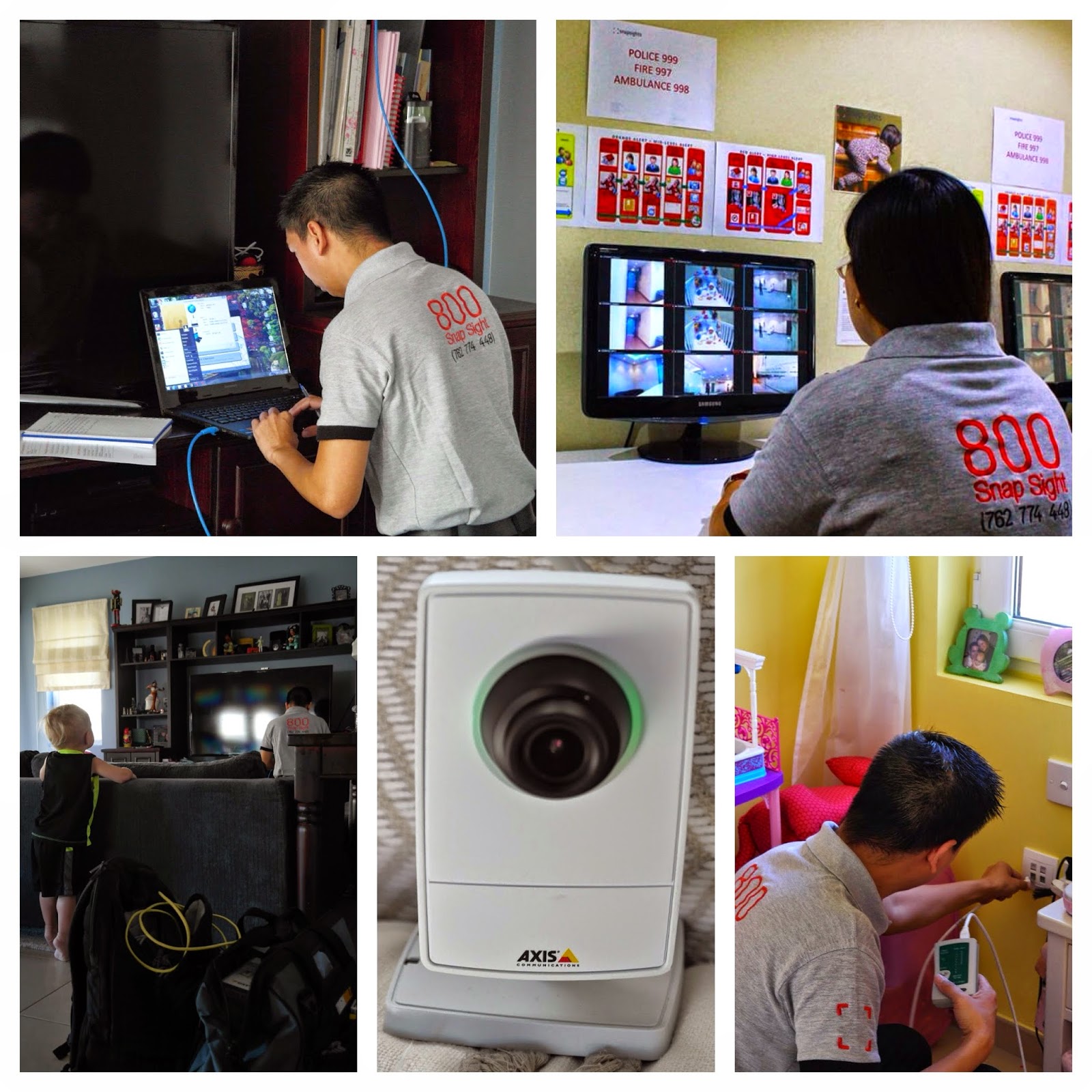 I was an itty bitty nervous as he was about to put them up. Why? I have seen/heard of horror stories of parents using similar devices and being hacked. The video showed the hacker shouting at the baby while it was sleeping, SO CREEPY! I was reassured that these cameras (Axis-the world’s most secure IP camera brand) have maximum data protection ensured by network encryption. They use the most secure infrastructure available. And this my friends, is why you don’t want to buy a shady camera from Dragon Mart! .
Chris fiddled around with some wires and cables and we were all set to go. Don’t ask me how or what he did, I am not a techy girl (even though I have a blog). When you register with SnapSights they provide you with as many camera’s as needed. I chose to only take two for my review. We placed one in the playroom and one in Ruby’s room as they are high traffic areas in our home. Chris then made a phone call with the team of girls and received the green light with the positioning of the set up cameras. He wanted to make sure they were perfect. He showed me the angle and they made note of the positions on their side. So professional. Chris then provided me with an online password/login. He was barely out the door and I was already sending the link to my family abroad so they could watch the kids from the reliable and secure online website. Shortly after my phone was ringing as the team of {SnapSights} wanted to know our rules at home (ie. no jumping on the couch).
I won’t lie, the first day or two felt a bit strange knowing that there were people who could see what we were doing. But I knew the team was there for one reason, to protect my children from harm and assure they were safe. It was also a great bribe for my children to behave 🙂 Whenever they started to act up, I reminded them of the cameras in place! The heck with how the kids and I looked and dressed, it was simply an extra meassure of protection for our home.They monitored my children from 8:30am-6:30pm daily with the exception of Friday/Saturday (however they give you the flexibility with timings). By the end of our trial my kids cried when Chris returned to remove the cameras. You will find out why later on in this review when you watch our videos…
Even though I do not have a nanny, this service was really beneficial to us. There were times (many) that I was at my computer working on my blog and Nate was in the playroom. Usually he is fine to play alone, but you know what can happen in one blink of an eye. SnapSights was on the phone in seconds with me if they suspected something dangerous or to caution me of a potential threat. I was rather embarrassed the time they called to tell me Ruby was dancing on a table and climbing the storage unit. They sent an SMS as soon as they saw Nate and Ruby fighting. Nate fell off a chair and they were on the phone immediately asking if he was okay. Just amazing. Truly amazing. Imagine if I were not there and someone else was with my children? I would want to know what was happening every second of their day-both good and bad. This is what SnapSights is for. There are three types of tiered alerts they contact you for: amber, green & red alert. Along with three methods of contact: SMS, phone call & email. 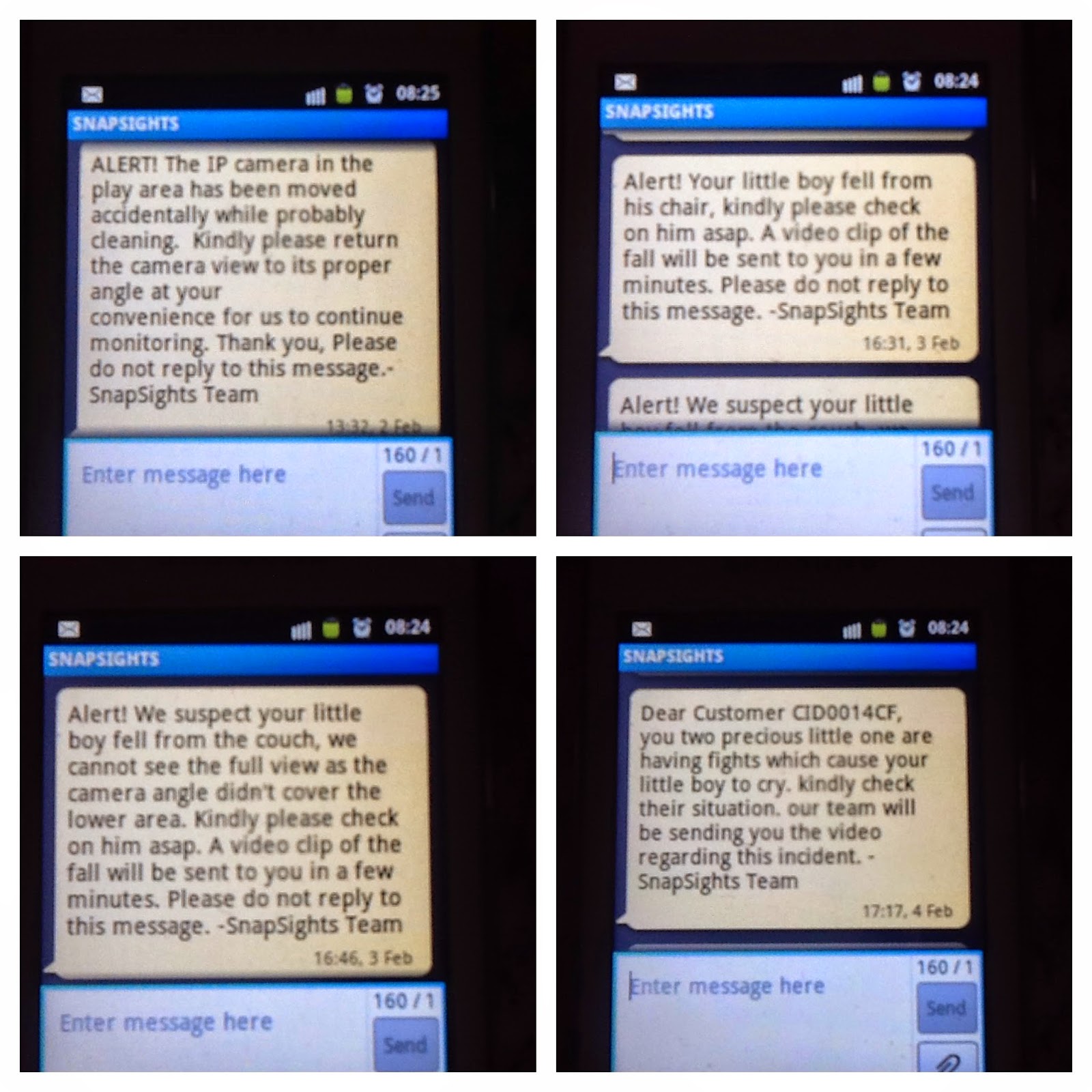 2) Nate falling off the couch

The most wonderful thing was at the end of each week we received a “Happy Moments Video”. My kids would ask me to replay them over, and over, and over, and over again…the music and moments was so touching I actually teared up! How beautiful that someone was there watching us and capturing these heartfelt moments which would otherwise go unnoticed. It was equally nice to share them with my husband who was busy at work.
Happy Moments:
1

And each day we received a “Happy Moments Photo”. You can see our collection at the end of this review!
I spoke with neighbors and friends about SnapSights. They were all really impressed with the concept. Some of them however said they would rather install their own nanny cam. Simply for catching bad things happening in their home. But how would they even be able to keep track of all this during their busy day? Are the cameras even safe from Dragon Mart or some cheapy shop? No! Do you actually think they would come home after a long day of work and sit there scrolling through the feeds? No! They would likely want to spend this time with their kids which they missed doing while away from the house.
I think if you have the money and you want a peace of mind knowing your child is safe then investing it into SnapSights is well worth every dirham. No matter how much you trust your nanny or family, isn’t it nice to be able to see a collection of all the moments you missed out on? Perhaps your baby’s first time crawling or walking? Checking in on them when they are peacefully sleeping? All these little moments help reassure us anxiety ridden mothers!
Oh and did I mention, the consultation is free? “If SnapSights does not live up to your expectations, we have implemented a 15-day money-back-guarantee policy for all first-time users.” They simply end your contract no questions asked and return your money. Now this is a company who cares about it’s customers!
{http://snapsights.ae/}
Our Happy Moments in Photographs: 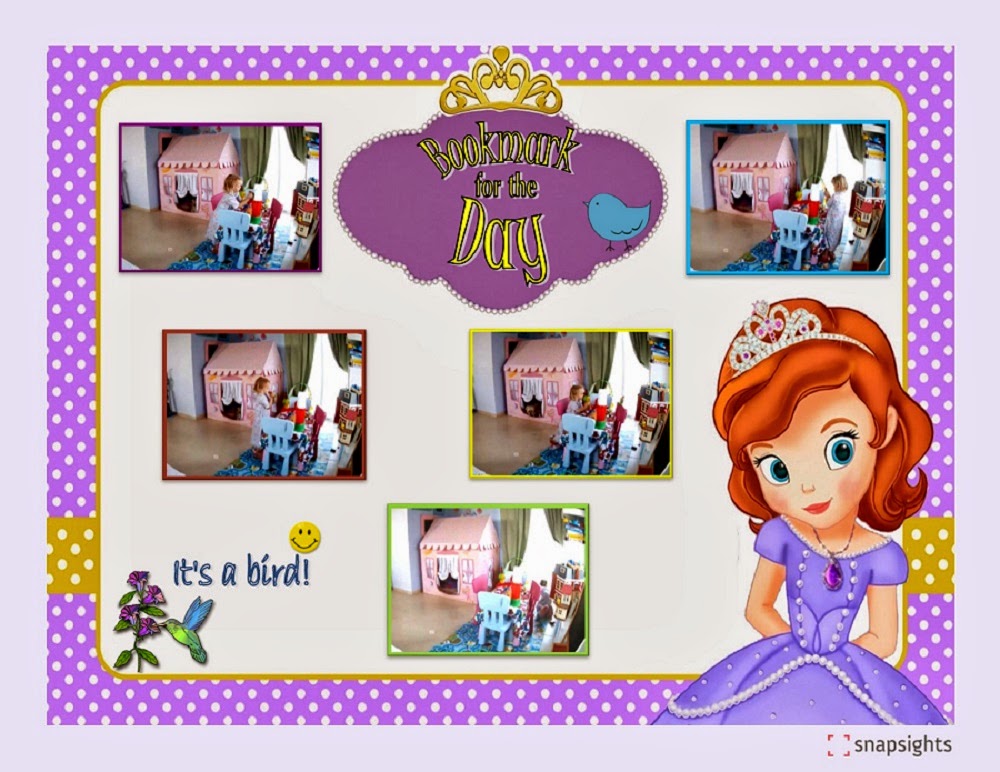 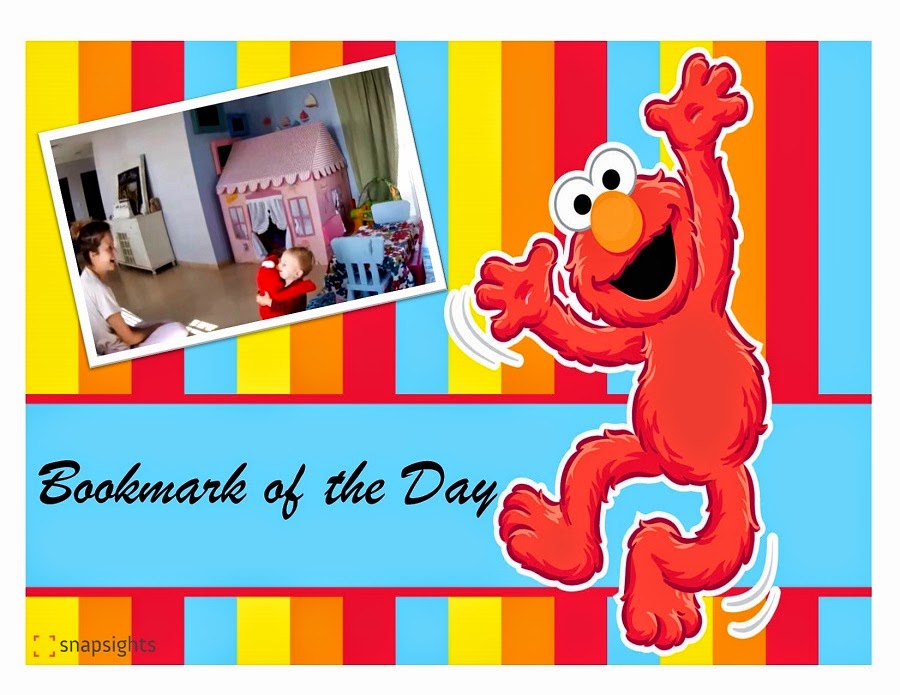 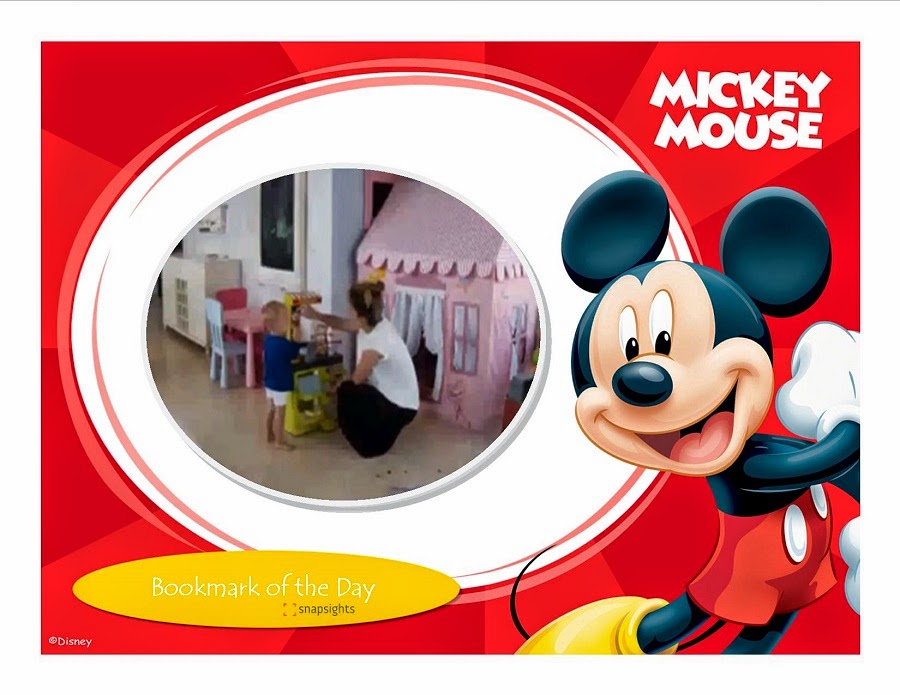 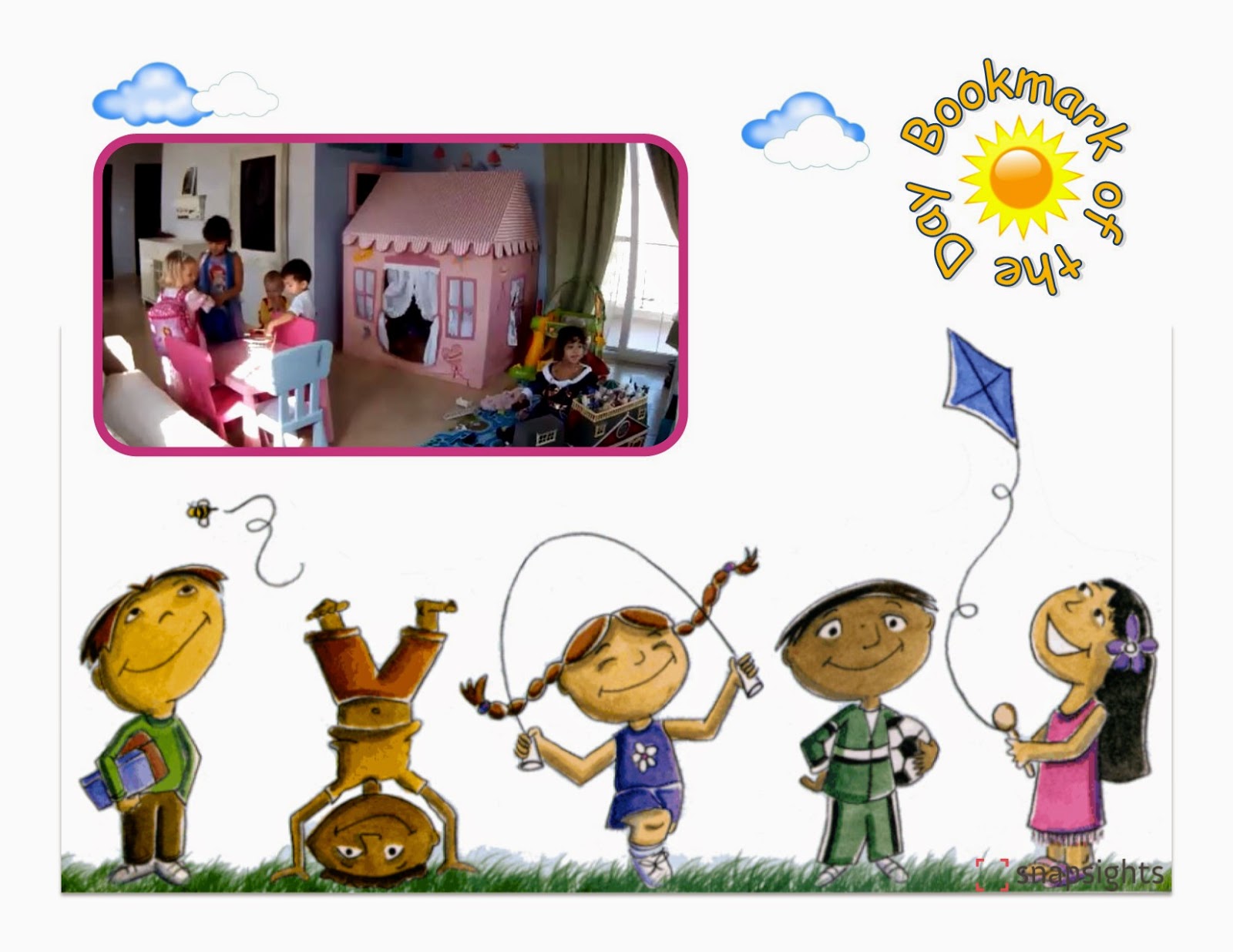 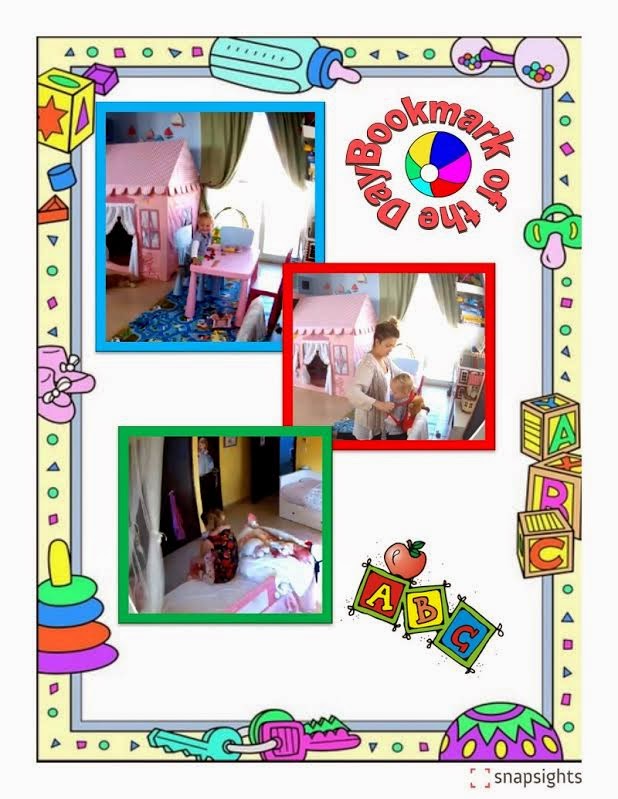 Welcome to my oasis! Formely known as ‘Mommy in Dubai’! I am now 'Mommy in Vienna’. Why the change? Because I am now based out of the beautiful city of Vienna, Austria!

© Copyright Mommy in Vienna 2020. Powered by WordPress. Designed by BluChic